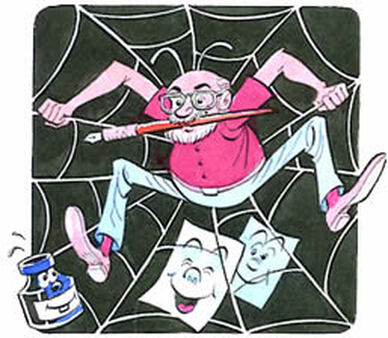 Vic Lockman was an incredible man with an incredible talent.  He was an artist.  Comics and comic book art was his forte and what he was best known for.  If you ever met Vic in person, he was sort of a comic in real life!  His stories, sense of humor and ability to make people laugh and smile,  were unlike anyone else I have ever met.  I read an article on Vic not long ago and the author stated,  " Vic might have been the most prolific comic book writer of all time and the least well-known."   He went on to say  "Lockman's stories ran among scripts by others in all the Disney comics, all the Warner Brothers comics, all the Walter Lantz comics, all the Hanna-Barbera comics and any other "funny" comics produced out of Western's Los Angeles office. He was the main guy behind a seventies comic called The Wacky Adventures of Cracky and he has been credited with creating the Disney character, Moby Duck. For years, a division of the Walt Disney company in Burbank was also producing comic book material for European publishers who needed more pages than they got by translating all the Gold Key books. Lockman also did hundreds of scripts for them.  Vic wrote thousands of comic book stories for Western Publishing Company beginning around 1950. These were for their Dell and Gold Key comics."   It is said that Vic likely wrote over 8000 comics and stories during his time with those publishing companies.  There is so much I could say about him, but I think Vic said it all best himself when he wrote his "mini- autobiography".   In Vic's own words.... here is his story.
" I was born of Vaudeville parents, Lockman the Magician and Escape Artist, assisted by my mother. My sister and I grew up in the dying days of Vaudeville, spending many years on the road and in theaters as well as fairgrounds throughout the U.S.  Up to high school my sister and I were largely self-educated by reading while traveling.

I won a drawing contest in Kindergarten/  I also won tree cash prizes from the Chicago Daily News for my trick cartoon drawings when I was 12.   I earned money throughout high school, in advertising and editorial art work.  I was the head of the Art Dept, of the school of Aviation.  While attending Billy Hon's Cartoon School in Los Angeles, I won a contest to draw a newly syndicated comic strip titles "Alfred".  I married my wife Jean at this point, thus beginning a family of 6 children.

Shortly after these events I began working as a lettering artist for comic books issued by Del Publishing Company.  These were all books of animated characters from various studios, but 50% of the work was on Disney books.   I soon started freelancing, writing scripts for many of the books in the above categories.  I expanded into drawing and worked for various publishers and magazines.  I wrote the gags for the daily and Sunday "Freckles" comic strop for 7 years, setting a longevity record in that position.  Briefly, I worked for Hank Ketcham on the Dennis the Menace comic book.

After becoming saved, I moved to Collingswood, N.J. where I drew editorial cartoons for Dr. Carl McIntyre's Christian Beacon newsletter.  During this period I also continues to write comic books strips.

While in seminary, I began to produce Christian tracts and booklets."   ~Vic Lockman
(*This endeavor continued until Vic's passing).

Vic is greatly missed by his family and friends.  We are blessed to be able to carry on his book ministry and continue to share his message and talent.  ~ Julie Lockman, daughter-in-law

Just a sampling of some of the Comics Vic created...